Posted on April 4, 2011 by superhappyawesome 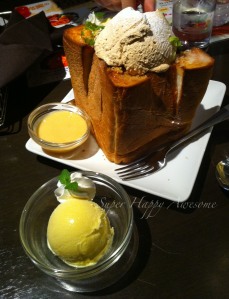 You know it’s a good weekend when there’s Karaoke, and last weekend involved not one but TWO trips to Pasela. Pasela seems to be all the rage in Tokyo right now, and they have a huge selection of songs, with entire books devoted both to Foreign songs and Anime Songs and some 300,000 Japanese songs to boot.

But the real draw, for me, is the Honey Toast. In Japan they seem to have realized that white bread is practically cake anyway, and you might as well run with it. Think sweet and syrupy like French Toast, but minus the egg and with extra ice cream and various delicious toppings.

First take half a loaf of white bread, which tends to be blockier and square-er here, and toast it. Score the top to make toast fingers, then drown it in honey, syrup and butter. Add ice cream, fruity toppings, chocolate, nuts, whipped cream, pretty much anything goes. They even have a super-sized “Birthday” version, an entire loaf, costing over 3000 Yen. It’s totally on my list of things try before I die (that may kill me in the process!)

This particular delicious monstrosity was “Fresh Caramel” Honey Toast, so there was a lovely caramel mousse on top of vanilla ice cream, as well as condensed (caramelized?) milk and a few extra scoops of ice cream. It was fan-freaking-tastic, and though I can’t eat a whole one by myself (a friend claims his lady is capable)  just looking at it makes me crave it again!

What do you think, insane, or insanely delicious? It’s one of those beautiful examples of “Western” food (white bread and ice cream aren’t exactly traditional Japanese foods) that I can’t imagine existing in the West. Has anyone seen one of these outside of Japan?