Posted on January 4, 2011 by superhappyawesome

Ingredients for the dish

Today we decided to try a traditional Japanese New Year’s treat–おぜんざい. Ozenzai is a  red bean soup served with Mochi, or rice cakes. The soup is sweet and, well, beany. Red beans, called azuki in Japan, are a common sweet found in Asian countries, and while many non-Asians find the idea of beans for dessert to be wrong and sometimes disturbing, they can absolutely delicious. Often mashed and used as a filling in buns and dumplings, they are also sometimes made into paste or in this case, soup. 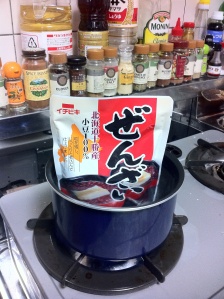 We live in an age of convenience. Here’s my bag of ready-made soup boiling happily on the stove. 6-8 minutes in a pot of hot water and it’s ready to go! Sweet soups seem fairly unusual to my western sensibilities, though I do remember having quite a lot of delicious strawberry soup the summer I lived in Prague. Do you ever eat soup for dessert? 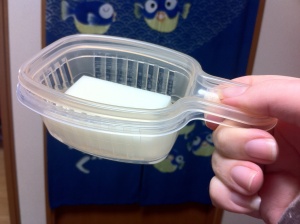 Mochi is a delicious treat made of rice smashed and pounded within an inch of its life until it no longer resembles the  grain it came from. It can be grilled or boiled, sweet or savory, and is incredibly versatile and delicious, without really having much flavor at all. This is a neat little device to boil your mochi in the microwave, with built-in strainer. So convenient!

The finished product–a nice hot bowl of red bean soup with a sticky rice cake on top. This time the mochi was just microwaved, but it’s even better grilled. Toss it in the broiler for a few seconds after boiling, and it’s AMAZING. Crispy and chewy and soft and sticky.

Would you want this for dessert?

Great success! Sticky, chewy, and delicious. Sean isn’t such a big fan, but he prefers his mochi savory. I enjoy savory mochi too, but I love sweets and this soup is no exception. The mochi stretches like cheese on a pizza, but there’s no cheesy flavor here! Just a hint of rice and the sweet taste of azuki. It’s filling and satisfying, without being creamy or rich in any way. The traditional Japanese diet tends to be low in dairy and fat, and even the desserts are no exception. This seems like a fairly healthy dessert to me, and it’s yummy too! おいしい！

What do you think, would you try it? If you have tried it, did you like it?