Posted on September 12, 2014 by superhappyawesome 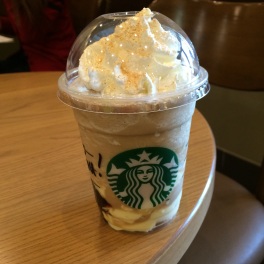 First up is the Caramel & Pudding Frappuccino. From what I’ve heard, the US had a Caramel Flan drink recently that had a flan-style caramel syrup. Bitter as opposed to buttery, as their caramel usually is. Well, the Caramel & Pudding Frappuccino here in Japan has a big helping of actual caramel pudding right in the cup. From Giga Pudding to Meiji Pudding (even Kyary Pamyu Pamyu’s  done pudding commercials), Japan has quite a little love affair with flan style caramel pudding. You can get it at any convenience store and pretty much any price point, from the cheapest store brand to the fanciest, creamiest, richest treat you can imagine. (Wow, I really want pudding right now.)

Starbucks is smart to capitalize on this love, and has done a bang up job of it. The caramel pudding frap feels fresh, but also hits the nostalgia button. It’s quite a flavor of childhood for many here in a way similar to the Coffee Jelly Frappuccino.

The cup has a hefty scoop of pudding on the bottom, followed by a generous layer of bitter caramel, followed by standard frappuccino and crunchies on top of the whip. It’s even heavier than the usual frappuccino, but you know that you’re ordering dessert in a cup with this one. 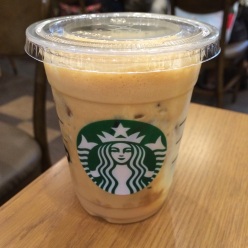 Next up is the Shaken Caramel Custard and Espresso, which is particularly interesting to me. I  remember finding Drinking Custard on the grocery store shelf next to the Eggnog around Christmastime in North Carolina. Is this a thing in other parts of the country as well?

It’s really interesting to have this an an element in an iced coffee drink along with caramel and espresso. The drink is only very lightly shaken, and the textures remain delightfully distinct. At one moment you’re drinking an icey, milky espresso, and then BAM, a mouthful of thick, rich custard. The different textures in the same drink make for a really unusual experience, much like the pudding frappuccino but lighter and more delicate.

About halfway through I added some cinnamon, at which point it really started to taste like Eggnog. I wonder if we’ll see the Eggnog Latte join the Gingerbread Latte at Christmas this year?

Also interesting is that this drink appears to only come in one size, with no whip. It’s delicious just the way it is, though. Happy Day indeed!