Posted on March 10, 2011 by superhappyawesome

After the Graduation Ceremony last week, the teachers celebrated by having an Enkai.  宴会（えんかい）means a banquet or a party, and they can range from boring staid affairs to raging infernos of drunken debauchery. 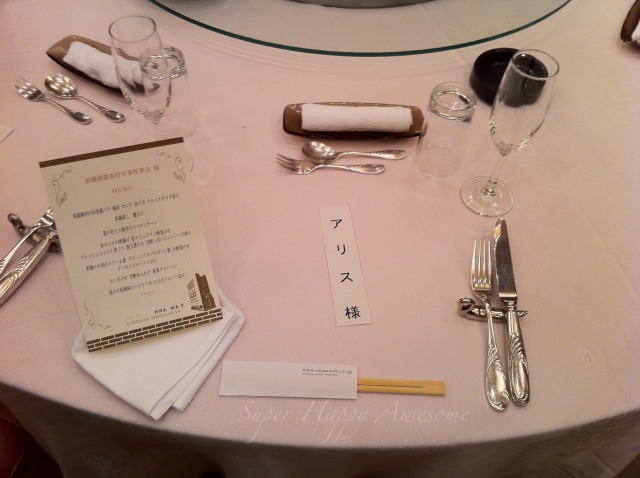 It’s considered rude to pour your own drink, and instead you pour drinks for others. Most of the evening is spent mingling around the room carrying a bottle and a glass–the bottle is for pouring, and the glass for receiving. Stop, pour, chat for a few moments, then move on. It’s a great social excuse, and an excellent ice breaker.

This party was a bit fancy, and you might be able to tell from the Champagne flute at my place setting. There were also printed name cards, and for some reason seeing my name （アリス） in Japanese (or Katakana, anyway) always gives me a little thrill–one of those “Hey, I’m in Japan!” reminders. We started the evening with a Champagne toast, a departure from the usual beer. I’m not a big beer fan, so I was pretty happy about this, though I’ve learned that it’s good to have a beer glass on hand to accept a sip or two from people trying to pour for you.

Some of my coworkers know that I prefer wine, and will even sometimes hunt down a wine bottle so that they can pour for me, which I really appreciate. Many people also often walk around with both beer and Oolong Tea for non-drinkers, which is a thoughtful nod to the designated drivers, though at one point a certain coworker may have poured tea into my beer glass. It was getting pretty late though, so I was impressed he could do much pouring at all by that point!

Enkai are usually a bit pricey, at least about $50 a head or more, but that generally includes all you can drink and quite a lot of food. The food is usually decent, and this party was particularly tasty. You can see here my salad plate, with paté and greens, as well as my one glass of beer. (Click the photos for larger versions!)

After that was Chawanmushi, a savory egg custard. I’ve had glorious 茶碗蒸し and terrible ones, but this one was quite nice!

After that there was a fish course, which was fried and in a sweet & sour sort of sauce. My memory is starting to get a bit hazy at this point, and in fact, this was the last course of dinner that I had. After this I was busy mingling and missed the next couple of courses, which was not the best plan for a drinking party!

I managed to come back in time for dessert (this surprises no one, I’m sure!) of which there were two courses. Fancy! First up was not a fried egg, as this appears to be. Instead, it was a sweet Annin Dofu (杏仁豆腐), or Almond Jelly. The “yolk” is actually mango puree, and this was really lovely!

After this was 2nd Dessert, a roll cake filled with tropical fruit cream, with more fruits on the side and a little dish of orange sherbet. It was quite nice, but I think I actually preferred the Annin Dofu!

The best part of the night was when the hotel management left the bar unattended, and a certain Super Kick Ass Coworker (if you’re my friend on Facebook you’ll know who I’m referring to!) took over, pouring drinks and running the show. Better still was when we found the rest of the Champagne–well, it was Spumante, but still better than beer!

The best part of the night is always talking to people who you don’t normally have a reason to during the normal course of the work week. Alcohol (or Oolong Tea) is the great barrier breaker, and the conversations are a fabulous chance to mingle with all sorts of coworkers. The very best part of an enkai comes a few days later, when coworkers who never seemed to notice you before make a point of saying “Good Morning!” with a big smile. What happens at the Enkai stays at the Enkai, but the bonds formed can be long lasting.

Have you been to an Enkai, or have a good Enkai story to share? What do you think of the “Pour for others, not yourself rule?”

This post is my entry in this week’s Show Me Japan! Check it out!