Japan, the Media, and You

Posted on March 21, 2011 by superhappyawesome 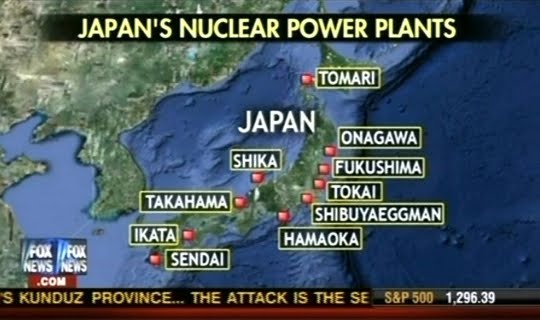 On Saturday, there was a question about the Foreign Media’s response to the recent events in Japan. Many have cited the fear-mongering whipping their families and loved ones at home into a panicked frenzy as one of the primary reasons for leaving Japan, as our friends continue to do, if only to relieve their poor parents.

This is a perfect example of the ridiculously poor media coverage that Japan has seen recently. On Fox News’ map of Japan, you’ll notice that Sendai, which is in the Tohoku region of northern Japan is located at the very southern tip of Kyushu.

Though much of the internet derided Fox for this, it is not, in fact a mistake–the map is a map of nuclear reactors throughout the country, and there is, in fact, a Nuclear Plant at the tip of Kyushu named Sendai.

That being said, about halfway up the map you’ll notice a strange name: Shibuyaeggman. Is that Korean? No, in fact that’s the name of a popular club in the happening district of Shibuya, called Eggman. Fox News somehow confused a Night Club with a Nuclear Power Plant. Seriously. Furthermore, they got defensive when Jake Adelstein called them out on twitter!

Shibuya Eggman responded by posting this message on their website: “Shibuya Eggman has no nuclear plant. Our electricity’s powerd [sic] only by music.” (Click the thumbnail for a larger size)

Of course, not every journalist has been running around like a chicken with their head cut off. The Register’s Lewis Page even went so far as to personally apologize on behalf of his profession at the end of this article.

He said, “As one who earns his living in the media these days, I can only apologise on behalf of my profession for the unbelievable levels of fear and misinformation purveyed this week. I have never been so ashamed to call myself a journalist.”

Lewis Page, we salute you for your honesty and your integrity. Fox News? Not so much.

Of course, the tragedy of this situation is the very tragedy that so many have ignored or glossed over, with thousands dead and missing. Donations of aid have lagged behind many other disasters, and we have to wonder if a part of that has been due to the focus on the nuclear situation as opposed to the tragic destruction in Miyagi and Iwate.

There are, however, lots of ways that you can help. Our friend Josh compiled a great list here, and there are new ways popping up all the time!

Living in Japan!
View all posts by superhappyawesome →
This entry was posted in Japan and tagged Earthquake, Eggman, help, media, news, Shibuya, Tohoku. Bookmark the permalink.

3 Responses to Japan, the Media, and You