Posted on March 30, 2011 by superhappyawesome

So as I mentioned, we spent this past weekend in Tokyo. Even though Tokyo Anime Fair was canceled, some of our friends still made the trip, and there was a lot going on. There was epic Karaoke, wandering around Akihabara and Ueno, meeting up with some of our friends from the Anime Industry, and lots of fun! 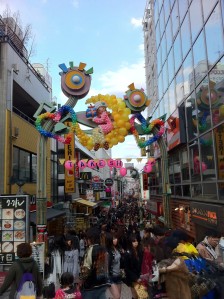 On Sunday, Sean had to get some work done, so while he settled in at a Manga Café I headed over to one of my favorite neighborhoods—Harajuku. Harajuku is one of my absolute favorite places in the world, and one of my favorite things to do is walk around on a Sunday afternoon. This is also the favorite activity of everyone else ever, it would seem, judging by the crowds!

I was in a mood for creativity, so I figured I would wander around the back streets of Jingu Mae and drop by some of my favorite galleries, and check out the shops as well.

I started by walking down to the h.Naoto store. This 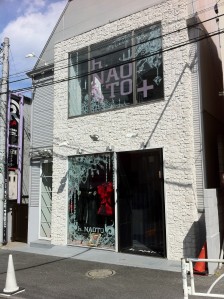 is the home of designer Hirooka Naoto, whose various fashion lines such as Sixh, Hangry & Angry, and the eponymous h.Naoto have been popular in the Visual Kei/JRock world since his debut in 2000. He draws inspiration from extreme punk styles, both influencing and being influenced by the Gothic and Lolita scenes, and his pieces are often striking and darkly elegant.

They were quite happy to see me, as h.Naoto was a major guest at this past year’s Otakon, and we also hosted a well-attended fashion show of some of his newest designs.

Though not all of the staff could attend Otakon, I had met the manager and various other S-Inc. members at a private fashion show in an underground club in Harajuku/Aoyama around this time, last year. It was definitely one of the coolest experiences I had during my tenure as President of Otakorp Inc. Everyone wore masks and was dressed to the 9s–and that was just the audience. It was pretty impressive! 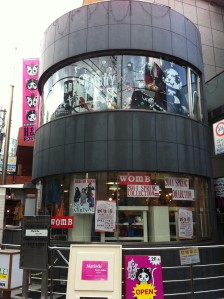 After checking out the shop the manager walked me over to the Hangry & Angry store a few blocks away, and introduced me to the staff there.

Hangry & Angry, under the h.Naoto brand, is headed by the designer Gashicon, and tends towards cute but still edgy. Hangry & Angry is also a Pop/Rock Duo, who we saw at Anime Expo two years ago, as well as the names of the adorable Gothic mascot kitties, which have a huge line of clothes themselves. (We own both a Hangry doll and an Angry doll!) 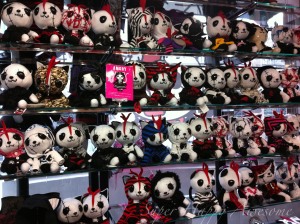 At last year’s Tokyo Anime Fair their booth happened to be directly next to ours, so not only did we see Gashicon every day, we also saw the enormous Hangry & Angry Mascots, in the shape of punk kittens, that regularly walked around the show floor. They were pretty impressive, and did a great job of attracting attention to their booth (and ours as well! Thanks, Hangry & Angry!)

One of the best parts of this weekend was noticing that my Japanese studying is finally paying off. I had my first taste of life in business without an interpreter, and though I still have a long way to go, I was able to hold my own communicating by myself. It was a fantastic feeling! Making small talk with my own imperfect Japanese is vastly superior to making small talk through even the best interpreter, and after years of relying on others it felt glorious to be able to just talk to someone. I really look forward to my Japanese getting better and better!

Speaking of which, I have to get back to studying, so I’m going to cut this off here, and continue on tomorrow with Alice’s Adventures in Harajuku: Part 2!