The Many Faces of Gunma-chan: Tamamura

Posted on July 13, 2011 by superhappyawesome

One of the surprise hits from our panel at AX was everyone’s favorite Prefectural Mascot, Gunma-chan! When he came up on the screen the whole room reacted with a big “Awww…” and we were pretty surprised by how much people seemed to love the horsey little fellow.

Thanks to our lovely friend at the International Affairs Division of Gunma Prefectural Government, we had some great Gunma-chan stuff on hand–there were stickers to give away, and flags to decorate with, and even a big plushie to sit by our microphones and keep us company at the front of the room. I thought there was going to be a fight when it turned out he wasn’t up for grabs and had to go back to Gunma!

Since he was such a big hit, I’m thinking of doing a semi-regular series of The Many Faces of Gunma-chan. I’m also planning on a “Meet the Mascot!” series, so if your prefecture/town/cultural entity/big toe/etc. has a really awesome mascot, please let me know, so that it can be featured! 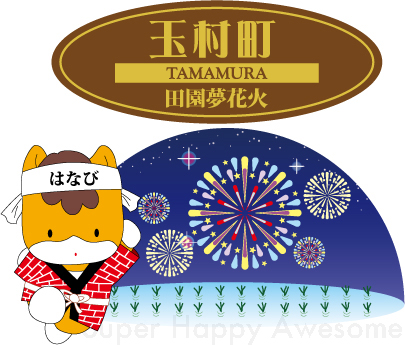 So today’s Gunma-chan comes to us from the small town of Tamamura, which is just a bit to the south of us. It’s about 15-20 minutes drive, or about an hour by bus–a fact that I am intimitely aware of, having made the trip about once a week for the past year.

That’s because this is the home of my visit school, a high school where I only teach one day out of the week. It’s a little inaka, or countryside, which is nicely represented by the rice growing under the fireworks in the picture. The area is a bit industrial, a bit agricultural, and is also home to Gunma Prefectural Women’s University, which is supposed to be a pretty decent place to study.

The atmosphere at this high school is totally different from my main school, but I really enjoy my time there. The students aren’t super high-level, but have a TON of energy and can be quite clever and amusing.

For example, when we play games the noise of their excitement can be deafening. I’ve even had students literally stand on their chairs and desks to try to be heard above the din, just so that I will call on them during pictionary or hangman. On the one hand my American brain is screaming “Danger! Accident! Lawsuit!” but on the other, it makes me really happy to see them get so excited and involved.

And as for clever? Today I wrote _ _ _ _ _ _ _ _ _ on the board during hangman and a student guessed the correct answer before I finished making the dashes! I think that kid might be psychic–his guesses were all downright spooky today. Can you guess what it was? To be fair, you can probably pick it out from the context, but all the kid had to go on was a vague theme of summer. I was impressed!

The other aspect of the Gunma-chan picture, and the reason why this is my favorite of all the city variations, is the fireworks! Fireworks translates to 花火 or hanabi (written on his headband in hiragana) in Japanese.

Or, as my students say, “Fire flowers!” It’s one of my absolute favorite Japanese words, because it’s so effortlessly, inherently poetic. The haikus just write themselves, people!

Flowers in the dark night sky

Sparkle in your eyes

Tamamura is famous for it’s huge annual fireworks display, which is in fact going on this weekend. I’m looking forward to checking it out, and hopefully I’ll see lots of students, many of whom were decked out in traditional costume at the Tanabata festival this past weekend and were really excited to have their pictures taken. 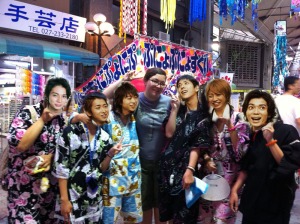 So, yes. It may be a small, quiet town with not a whole lot going on, but I really love Tamamura, and I really love this Gunma-chan!

Stay tuned for your next installment of “The Many Faces of Gunma-chan” and if you have a mascot you would like to see featured, please drop us a note at shaftsa at gmail dot com! AND if you have any pictures from our panel, please send them along too!

6 Responses to The Many Faces of Gunma-chan: Tamamura