The Green-Eyed Geisha Calls It Quits?

Posted on June 7, 2011 by superhappyawesome 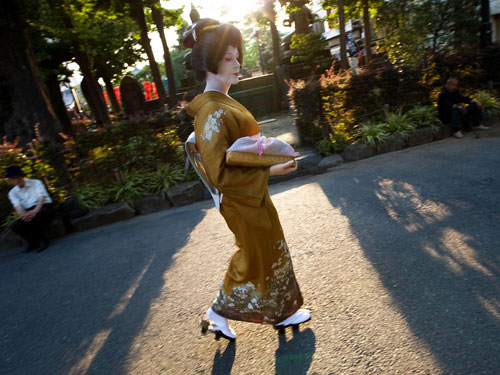 Westerners do seem to love the mythos of the Geisha, and I’m no exception. Obviously I’ve read Arthur Golden’s most famous novel, as well as the memoir of Mineko Iwesaki. I love Liza Dalby, who is generally considered to be the “first Western Geisha,” and who wrote some fabulous work on the subject. I’ve even wandered around Kyoto in search of these women and been lucky enough to spot them. In fact, a good friend of ours is doing the very same today, which is part of why this topic caught my eye!

As you may be aware, recently an Australian anthropologist (with a P.h.D. from Oxford no less!) has been working and living as a geisha in the Asakusa district of Tokyo. Fiona Graham, now 50, debuted as “Sayuki” after a year of training at the age of 47.  It was announced earlier this week that she is parting ways with the establishment, and will apparently attempt to continue on independently.

It’s hard to get a clear sense of the true story, and it’s likely that we’ll never really know what actually happened. Graham claims that she is being ostracized because she is a foreigner. The Telegraph quotes a number of sources that state she did not follow the rules, take part in ongoing training, and even accuse her of fighting with the establishment.

It is said that she has been asked to leave “after being accused of bringing the movement into disrepute.” The most damning quote of all, which perhaps sums up both sides of the story, comes from a fellow geisha in the same district. “It’s embarrassing, but she just does not understand that.”

What do you think? Is it impossible for a non-Japanese person to truly engage in such a traditional Japanese art form? Did she simply not fit in due to her own personality clashes? Or is she a pioneer and being ostracized, as she claims, based on the color of her skin and the cultural differences she faces?

Living in Japan!
View all posts by superhappyawesome →
This entry was posted in Japan and tagged Asakusa, geisha, Japan, Tokyo, traditional. Bookmark the permalink.

7 Responses to The Green-Eyed Geisha Calls It Quits?