Posted on August 21, 2011 by superhappyawesome 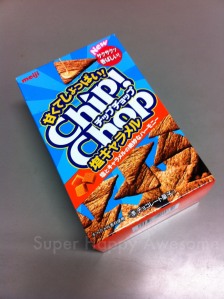 On my lunch break yesterday I stopped by a convenience store, and a new package of Chip!Chop caught my eye. I’d just posted about the catchy yet creepy commercial, and I figured I might as well try the actual product. Chippu choppu!

Well done, advertising–you have parted me from my money! Mission accomplished. However, it is now my job to protect my friends and prevent this from ever happening again.

So, next to the usual chocolate flavor was a fancy new flavor–Salt Caramel! I love caramel! I especially love salted caramel, which always feels delightfuly elegant and a little bit French. What’s not to love?

So I got back to work, opened up the box, and nibbled one of my new cookies, expecting delight and deliciousness.

Instead of being delighted by this glorious confection, my response was more along the lines of “Get the hell out of my mouth.” 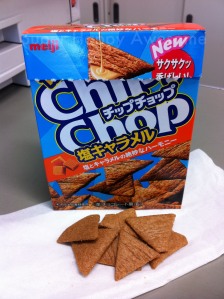 It was so bad that my brain couldn’t quite believe my mouth. “Try another one!” it said. “They aren’t that bad! Oh…no. No, you were right. They’re terrible. Get the hell away from these. Seriously. What the eff. Out. Get out.”

I didn’t want the rest to go to waste, and since I was at work, I thought I might as well inflict, er…share them with my coworkers. Chippu Choppu!

First stop was my super awesome supervisor, who is not afraid to speak her mind and immediately pulled a face like a dog had farted in her lap. “Oishiikunaiyo!” she declared. Definitely NOT tasty!

Just then one of my new coworkers walked up, with the very clear intent of Being Friendly. He’s quite young, just started in March, and I get the sense that just beneath his quiet, professional “I’M A TEACHER” demeanor, a very fun and friendly guy exists.

He’d obviously prepared his opening volley, and proudly declared (in English, of course) “I’M A TEACHER.” After complimenting him on his impressive linguistic talents, I offered him one of the sadness crackers in my box of lies.

“Really!?” my supervisor and I looked at him like he had just told us that he likes eating flaming dirt.

At this point he realized that we didn’t actually like the vile things, but he was caught in a cultural trap of epic proportions, and his eyes flew open as panic gripped his face.

Because, of course, he’s socially trained to agree with the group, but to do so would A. admit that he had lied (less offensive) and B. insult the  snack I had thoughtfully bestowed upon him (very offensive.) Rock! Hard place! Chippu choppu!

What was so bad about them anyway? Well, I imagine the conversation that birthed these monstrosities went something like this: 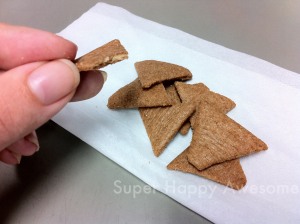 The cookie, which even looks a bit like a depressing brown Dorito, or perhaps a rejected Wheat Thin, is sandwiched around a thin layer of caramel. Unfortunately, there just isn’t enough caramel to stand up to the overwhelming saltiness on the cookie.

It basically tastes like someone decided that this time, instead of salsa, lets use caramel sauce! But instead of nice quality stuff, lets use the super cheapy kind. And you only get a tiiiiiiiiiiny little bit per chip. And instead of dipping, we’ll just shove it inside the chip. Chippu Choppu!

And don’t get me wrong–salty and sweet can go very well together. Chocolate covered pretzels? Amazing! Sea salt ice cream? Incredible. Salty Caramel Chip!Chop? Perhaps the salty flavor comes from tears, for these cookies taste of sadness. They should just call them Depression-flavored Chip!Chop; it would have been more accurate.

Maybe the plain chocolate variety is better? Maybe the roasted nut ones are nice? Does anyone like the salt caramel taste?

I’m not getting my hopes up.

This post is my entry in this month’s J-Festa, on the theme of “Food in Japan”!

Living in Japan!
View all posts by superhappyawesome →
This entry was posted in Food! and tagged chip chop, dessert, gross, it's a trap, lies, salty, sweet. Bookmark the permalink.